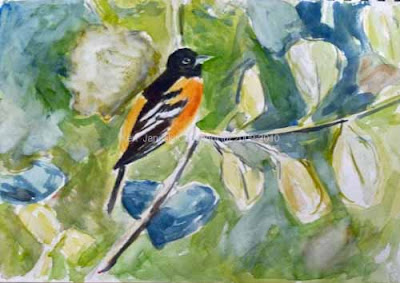 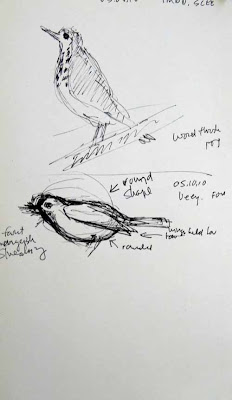 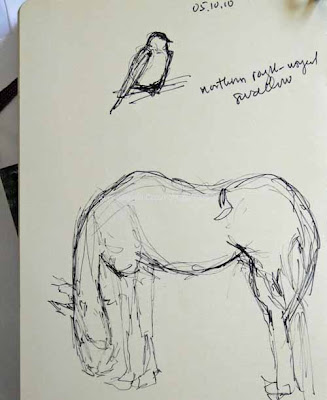 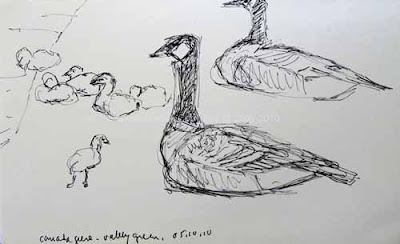 It's very hard to stay inside in May with bird migration in full swing. So I spent 4 hours outside today even though the temperature probably never broke 60. Again the Baltimore Orioles were singing away, this time at the Wissahickon. Wood Thrushes and Veeries were also plentiful and I include a sketch of them. For some reason I just couldn't get the very round shape of the Veery down correctly. I also came upon some Canada Geese and their goslings and settled down on a park bench to sketch them. I knew they'd be nervous because of the young. But I was proceeding along fine, just feet from them, when someone came up and took photos. That moved them all from their original positions and made the sketch a bit more difficult.

The air was alive with Northern Rough-winged Swallows so I finally took the opportunity to sketch one of them. As I left I couldn't resist trying the horse in the corral next to where my car was parked - I realize this is an unusual statement coming from a city as large as Philadelphia. But it's true I parked next to a corral with two horses to do my birding about a mile from our house.

And finally back to that beautiful Baltimore Oriole. This is based on the same photo as yesterday's failed attempt. I like this somewhat better. But the background is a mess. But I don't think I'm going to get a good Baltimore Oriole without numerous failed attempts. This is number two. They are such beautiful birds, both in song and appearance, that you just can't help but want to get them right.
Posted by Ken Januski at 5:53 PM