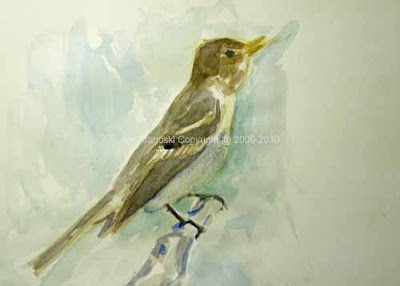 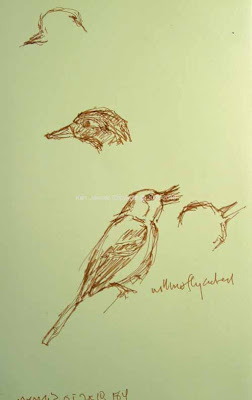 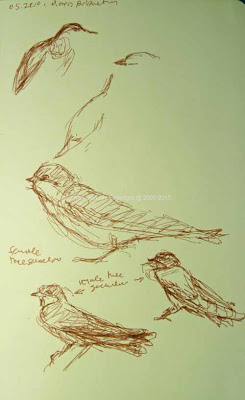 For a couple of years now we've seen Willow Flycatchers at the wetlands at Morris Arboretum. But we've always noticed them in late summer or early fall. So we've never known if they nest there or not.

Today I got a clue when I found one singing there. That's no guarantee it will breed. But it is starting to get late for migrants and the wetlands SEEMS like good breeding habitat. We can always find them at Tinicum(John Heinz National Wildlife Refuge) in Philadelphia in the summer. But it would be nice to know they're also almost next door, at Morris Arboretum.

Over on the wildlife art thread of birdforum.net someone suggested a new thread on 15 minute bird paintings. That was my intent with the one of the Willow Flycatcher here. It's based on a field sketch I did today, also above, as well as some photos I took. Due to the drab nature of these birds they are a bit difficult to deal with. But nothing ventured nothing gained. I also tried both in the field sketch and in the painting to portray the bird singing. As you can see in the field sketch I just didn't get it right. In the watercolor I had the luxury of looking at a photo I took so it may be a bit closer to that open-billed, head-thrust-back, chest-puffed-out pose that many passerines take when they sing.

Also included are some field sketches of Tree Swallows which were kind enough to stay in the same position and give me a decent chance at getting them down on paper today.
Posted by Ken Januski at 3:37 PM