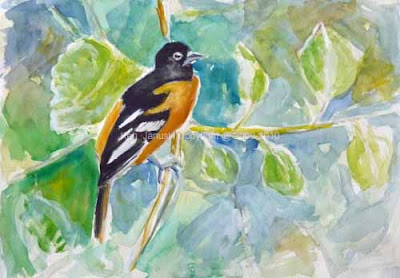 If we're in Philadelphia in early May we often take part in a bird count, one focused on migratory birds. It is the beginning of peak migration. At first I think this was called International Migratory Bird Day. Now it may just be part of a Pennsylvania count. I've never really investigated the details.

Yesterday's count was difficult. Rain and thunderstorms were predicted, though they never appeared. Trees have leafed out earlier than normal so it's hard to see birds even when you hear them. And, it was extraordinarily windy, something birds really don't like. They hunker down out of sight in it.

So our counts at both Schuylkill Center for Environmental Education and along the Manayunk Canal and Schuylkill River were a bit low. Nonetheless the Baltimore(now officially 'Northern') Orioles were newly arrived and singing away. Their songs are so rich and unique that you always know when they're around.

We also saw, or heard, a good number of Wood Thrushes and Veeries, birds which we didn't see until yesterday. My first bird of the day at SCEE was a Wood Thrush, singing away about 10 feet in the air right in front of me. I took advantage of this to do a quick field sketch. It was quick though because I had a lot of ground to cover.

I'm not showing the thrush drawing since it's not particularly striking. Instead I'm showing this Baltimore Oriole based on a photo I took yesterday. It took about 15-30 minutes for a preliminary sketch and another 30-60 minutes to paint.

It turned out pretty much as I expected: very disappointing. This bird of brilliant colors and contrasts seems like the perfect subject for a painting. And like it's counterpart in red, the Scarlet Tanager, it seems impossible to paint. The brilliance of a real oriole or tanager seems to disappear and turn to mud in a painting.

I've avoided painting Scarlet Tanagers for years because of such problems. But I got good photos yesterday and a painting of a Baltimore Oriole seemed like such a fitting tribute to many of the coloristically brilliant neo-tropical migrants that appear in May.

I'm disappointed in the results but not sorry I tried. I'll keep working at it and eventually get a painting I like. This migrant and all the neo-tropical migrants deserve no less. They are threatened from all directions, including by the people who I'd put in the lowest rung of hell, developers. Perhaps if people could see what truly striking creatures they are they might have more interest in saving them and not be so cavalier in destroying their environment.
Posted by Ken Januski at 5:59 PM