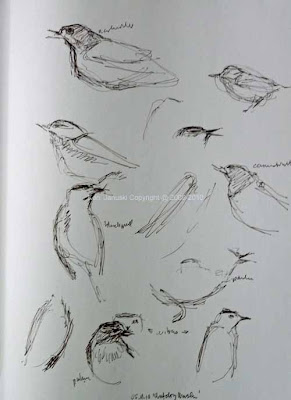 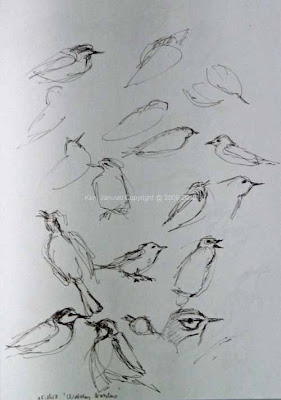 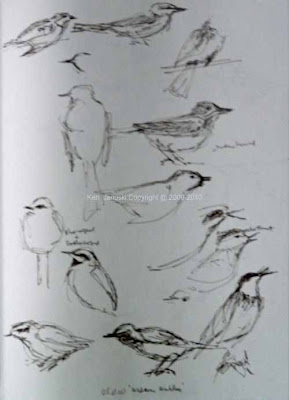 I think it was probably about 15 years ago at a 'Warbler Weekend' at
Pocono Environmental Education Center that we first saw the video 'Watching Warblers' by Michael Male and Judy Fieth. At that time PEEC's workshops started on Friday night and ended on Sunday afternoon. It was always thrilling to watch the main Friday night presentation, a teaser for what was ahead. These presentations were almost always successful and made you eager to get out early the next morning and see the birds. But one time this video was also played. That was enough to nearly give you a heart attack - just too much excitement! All of the colorful eastern wood warblers on one video, mainly in breeding habitat, and often singing their songs. What more could you ask for? Well outside of seeing the birds themselves I mean.

May is the month of warbler migration in Philadelphia. A few have arrived but nowhere near as many as you'd expect by now. But barring some sort of horrific fallout from the Gulf oil spill, which is always possible, they should be here soon in greater numbers. Just today I saw a couple of Canada, Black and White and Common Yellowthroat warblers. And Ovenbirds were singing away though I didn't see them.

It's generally difficult to even see warblers let alone draw them. This year will be worse than usual because the trees are already fully leafed out. We may easily hear warblers but seeing them will be hard. And yet this is the only chance I'll have to draw them in their breeding plumage. If you can barely see them how in the world can you draw them?

Another birder asked me this very question last week in Cape May as we searched Higbee Beach for warblers. Well I've never been successful at it. But I hope to change that this year. I did at least get the head of a Prairie Warbler last week at Cape May. One problem, outside of being distracted by their beautiful colors and patterns, is that I just don't really grasp their basic shape. I can never figure out how the head fits with the torso, and where the wings fit on the torso.

So this afternoon I played 'Watching Warblers' and sketched as it played. Though I could have stopped the DVD and had an easier time drawing I didn't do so. When I'm out in the field the birds aren't going to stop and pose for me. They're busy hunting for food. So the best way to get ready for drawing them was to just draw as the tape played. You see the results.

I like them, even though they're meant to be an exercise, not finished drawings. I think that they've accomplished that somewhat. We'll see what happens now when the warblers finally arrive.