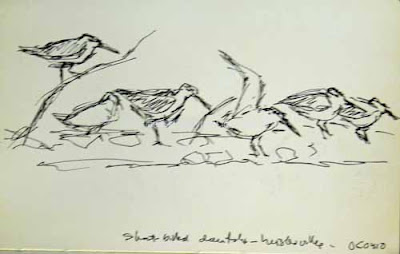 I never finished putting up the fieldsketches from our recent trip to Cape May. After the first batch I got distracted with new works and new birds seen in Philadelphia. So here's the remaining group. The sketch above is of a group of Short-billed dowitchers trying to find places to perch on a small fallen tree at Heislerville WMA near Cape May, NJ. I think part of the fun of fieldsketching is capturing real life moments like these. 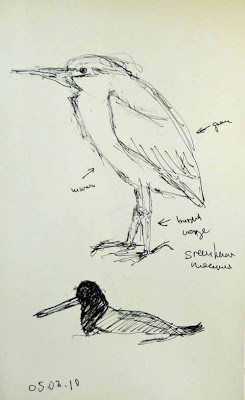 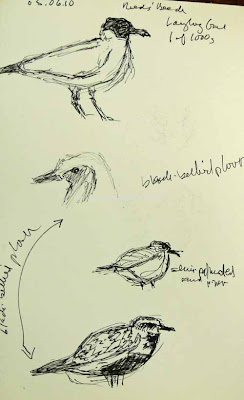 Following up on the shorebird theme the two drawings above include another Oystercatcher as well as a Green Heron, and a page of Black-bellied Plovers along with a Semi-palmated Sandpiper, and a Laughing Gull. We did go to Reed's Beach by the way to see if any Red Knots had arrived yet. Nope, just hundreds of these raucous Laughing Gulls. Our single Red Knot was seen at Heislerville. 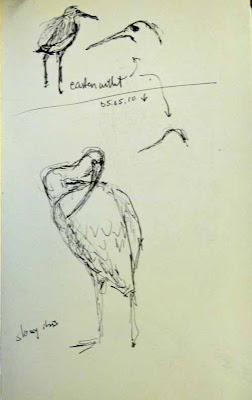 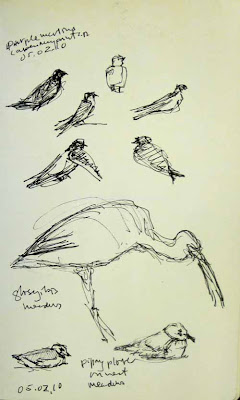 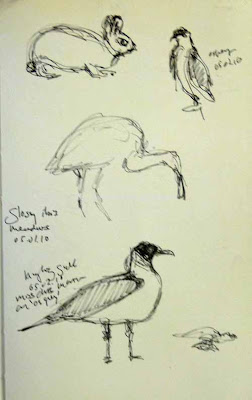 Next we have Glossy Ibises. They were everywhere. In the sky they just look like dark birds. Up close as many of these were they are wonders of iridescent colors, somewhat like the green and maroon of Green Herons, but toned down about 6 notches, to where they are very dark. 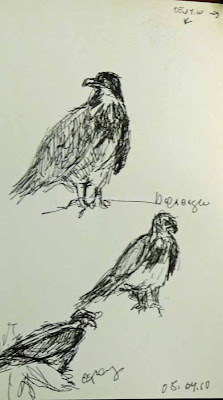 Finally two drawings of an immature Bald Eagle seen at Heislerville and one almost indecipherable Osprey, most likely also seen there.

Finally I should say that these are all done with a Faber-Castel 'Pitt Artist Pen.' I've had these pens for a long time but only recently started using them for fieldsketches. I think the fact that you have to live with what you put down and not worry about erasing makes for both more sketches and more spontaneous sketches.
Posted by Ken Januski at 1:48 PM