Sketching the Natural Wealth of Cape May - Part Two 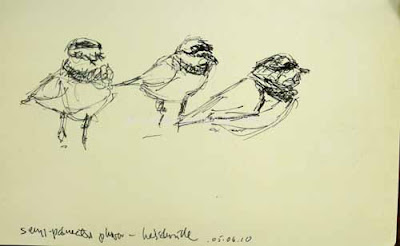 About six months ago I published a post called 'Sketching the Natural Wealth of Cape May.' It was a celebration of both the bird diversity of the Cape May, NJ area and of the value and excitement of fieldsketching.

Well it's time for part two of a probably recurring theme. We spent the last week in the Cape May area, seeing over 100 species while we were there. They include shorebirds, warblers, raptors and others. The sketch above was based on tens and tens of Semi-palmated Plovers sitting before us at Heislerville WMA. Though a single bird might have been more artistically successful there were many birds and I wanted to show that. 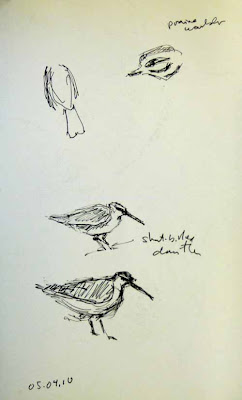 We also saw many Short-billed Dowitchers, both at Heislerville and elsewhere. They're at the bottom of the page above. At top right is a brief sketch of a Prairie Warbler. The wood warblers are among the most beautiful birds that visit or breed in the U.S. so we always love to see them. But they flit actively about constantly in search of food. Though this was probably the most good looks at a Prairie Warbler that I've ever had this still was the best I could come up with. So as you can see there is still a lot of room for improvement. Many people know how hard it is to even see wood warblers, let alone photograph them. I think most people who know this, as one person said who was watching me try to sketch them, realize that actually sketching them is like some sort of extreme art sport. But it's not just a sport. It's an interaction with a living creature. You can't fake it. Either it works or it doesn't but often the thrill of even trying shows in the drawing. 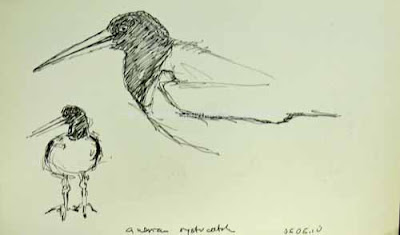 There is a movement in food called 'Slow Food', and I've heard of such things as 'Slow Art.' I haven't actively investigated their meaning but I think that they are a reaction to a non-stop world and a realization of the pleasure that is lost in not taking time to enjoy things, whether food, art or something else. The same can be said of birding. We're slow birders. So we don't get alerts on our cell phones about the newest rare bird 25 miles away. But we do almost always end up with memorable experiences with certain birds, and perhaps other animals, on our vacations. Last year it was the Piping Plovers at Cape May. This year among other things it was American Oystercatchers. For three or four days they were at the same place at 'The Meadows' and allowed a very close approach. Above are two of the better drawings I did of them. 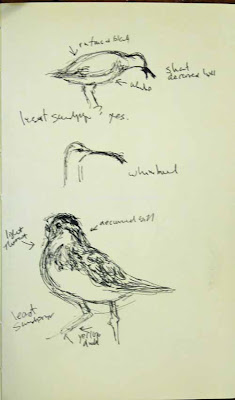 Another benefit of sketching the birds that you see is that you look at them more closely than you would if you were just trying to identify them or photograph them. I think the reason for this is that in IDing a bird you just need to see enough characteristics for your brain to decide on the ID. This is of course a complex and enjoyable process. It's part of the reason I think that many people love birding. But to draw a bird you need to know more than just some charateristics, or field marks. You need an exact pattern so that you can copy the entire bird.

Getting an exact pattern is almost impossible though. Almost no birds sit still for you. So you need to look extremely intensely trying to grasp the most important features so that you can get them down on paper. The top and bottom drawings are me trying to draw a Least Sandpiper and also making sure that is isn't the very similar Semi-palmated Sandpiper. One clue is a downcurved bill. That was obvious on the birds I saw and I was trying to capture it here. Unfortunately due to foreshortening it's not very legible on the bottom drawing on the page above. In between is a quick sketch of a Whimbrel. 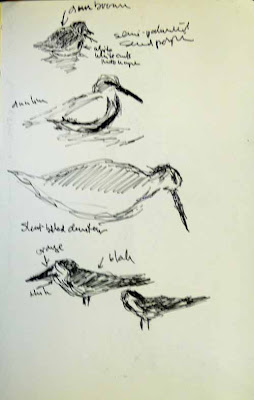 Along the same lines the last page above includes numerous shorebirds, starting off with the very small Semi-palmated Sandpiper and ending with the large Black Skimmers. The small size of the Semi-palmated was made all the more evident to us by some bird-banders at Heislerville. One researcher held the bird in his hand while he banded it and we saw how truly small the bird actually is. It was an amazing experience. In between, going to larger and larger sizes are a Dunlin and another Short-billed Dowitcher.

These are less than half of the drawings that I did. Over the next few days I'll show the rest.
Posted by Ken Januski at 9:24 PM

your sketches are great. and what a wonderful difference to all the photo blogs.
you sure are right, that for sketching you have to look much closer and be aware of every detail.