Bit of a Break 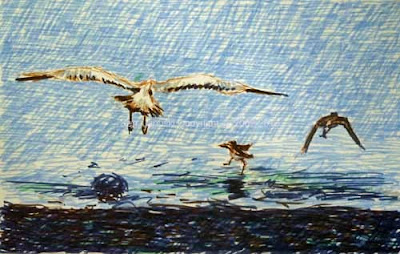 Sometimes you just feel like stretching out and trying something new. For some reason my Faber-Castell 'Pitt Artist Pen-Brushes' have been calling to me recently. The siren song of a felt-tip pen! Who knows why. I bought them at least three years ago and never liked them because the point seemed too large and flexible, more like a brush than a pen. Maybe I just never noticed that they had 'brush' in their official name.

In any case I enjoyed fooling around with them in the Baltimore Oriole sketch yesterday. So I decided to try something a bit more developed today. This is based on a photo I took a year ago at Heislerville WMA in New Jersey. It caught a gull, probably Ring-billed, a sandpiper, probably Semipalmated and a Dunlin in flight or just landing. I've always liked it but working from photos, especially for birds in flight always seems like cheating. No human could ever see this scene. Only a camera could capture it stop-action like that.

But since I was throwing caution to the winds today by using the brush-pens it seemed fitting to go ahead and break some other rules. At least my rule-breaking doesn't lead to an economic meltdown.
Posted by Ken Januski at 6:21 PM

I'm not sure what got into me. But I do think that my work is more spontaneous and lively if I feel that it's just an experiment as this was. I often find the same thing with my very quick watercolors. They tend to look better than many of the more developed ones.

The Wonder of Spontaneity.