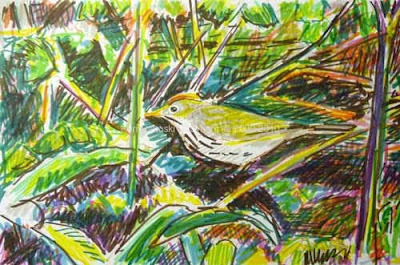 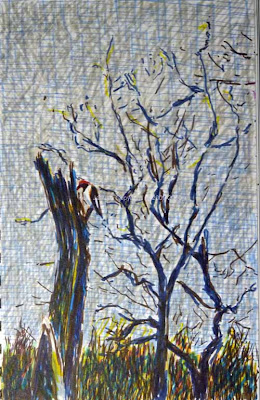 Fooling around a bit more with the felt-tip pens. These two are based on photos that I took, one an Ovenbird at Shenandoah National Park and the other a Red-headed Woodpecker seen at Lake Le-Aqua-Na State Park in Illinois. For various reasons I didn't think I could do much with them, much as I like both bird species.

But these felt-tip pens almost force you to work loosely because the tips are just too broad to allow detail, at least at the small size I'm using. So both photos seemed like they might be possible to work from. At least it was worth a try. The nice thing about a new medium is that you can play with it in numerous ways. I'm sure I'll be doing some more in the coming days and weeks.
Posted by Ken Januski at 6:30 PM