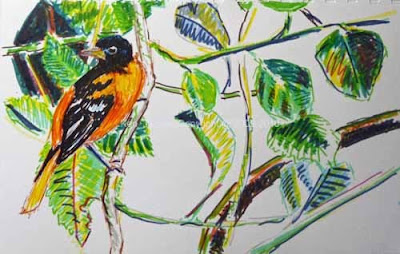 Twice in the last week I've learned something new about the Baltimore Oriole songs that I find so captivating. Laura Erickson, outgoing editor of 'Birdscope' from Cornell Lab of Ornithology says in this issues 'From the Editor' that she learned her local Baltimore Orioles song while living in Madison, WI and then could tell each spring which orioles were local and which were migrant.

I thought of this when reading Mel White's article 'Note Imperfect' in the newest issue of 'Living Bird', also from Cornell. In it he commits the sacrilege of saying: "I like my description of a Baltimore Oriole's song as sounding like a tone-deaf person trying to whistle a generic bird song better than, say, 'rich, piping whistled tones.'"

What??!! 'A tone-deaf person trying to whistle a generic bird song?' What an insult to the beautiful songs of Baltimore Orioles, which in fact are 'rich, piping whistled tones.'

Unless that is some of us are lucky enough to have local Baltimore Orioles that know how to sing and others, like Mel White, aren't so lucky.

This is not to pick on Mel White. I've always enjoyed his writing. I just can't understand his take on Baltimore Oriole songs. But the fact that their songs do vary by locale makes me think that maybe they're just underachieving songsters in his part of the country.

Another Baltimore Oriole disappointment has been my artistic representation of them. I've published three in previous posts. The last, done in felt-tip pen, seemed the best to me. At least in gave some feeling of the richness in color and song of the Baltimore Oriole. But it was more or less a scribble.

Finally, at top, I have one that I like. This also is in felt-tip pen, but I think combines realism and abstraction in such a way to portray a Baltimore Oriole as I see and experience them.
Posted by Ken Januski at 9:16 PM

And why is colour pencil so rare? Why does everyone do water colour? I am no artist, can't draw, butI like scribbled drawings, where one can see how the pencil moved, and I also thought that the birds are more clearly visible when I can see how they were drawn.

I can't speak for 'everyone', but I do think that there are a fair number of artists working with line in pencil or ink. I like working in line as well as in paint. They all seem to have their strengths.

But I do agree with you about liking scribbled drawings. Often that gives them a real sense of life.