Back in a Gallery 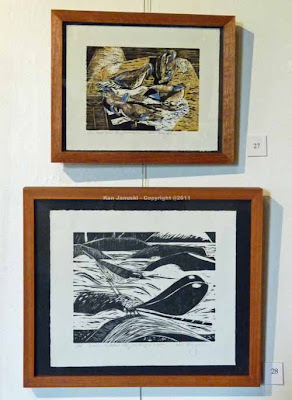 When I first moved to Philadelphia I spent the bulk of my time making art. Making a living, paying bills, etc. was secondary. Not that I didn't pay my bills. Just that I didn't make a steady job whose primary purpose would really be to pay the bills become my top priority.

At that time I had a studio next to the not-yet-renovated Ben Franklin Hotel on Chestnut St. in Philadelphia. What time I didn't spend painting and drawing I spent doing the dirty work of trying to get my work shown. To make a long story short I spent a lot of time photographing my work, then manually masking the slides I got back so that the work itself was accentuated, then working up the nerve to walk into what I thought where the most high quality galleries in Phildelphia and asking them to give me a show.

Why was a show so important? Well at that time there was no internet. If I wanted to make a living from my art I had to have someone buy it and the primary, in fact almost the only, venue for that was commercial galleries. The other option was juried shows at various institutions and I also spent a lot of time applying to them, with about a 50% success rate. And of course there were fellowships, what I and many of my friends called 'The Lottery.'

I'm not a purist about art, though I suppose I might have started out that way. But I understood fairly early on that you had to SELL work in order to survive, and the main outlet for that was commercial galleries.

But after I'd visited most of the galleries I was interested in and having a number of them come to my studio and look at my work I still didn't have the promise of a show.

Eventually those aforementioned bills took their toll and it was either ignore them or get a full-time job. So I got a job. That cut into my time but I still made art and tried to get shows.

At some point though, as I mention on my web site, I began to doubt that I was going to be able to show in the galleries I wanted to. They continued toward 'ideational' art, where ideas, quite flimsy ideas to my mind, and verbiage replaced visual substance. So much work seemed to need a lot of 'verbal advertising' in order to get any attention. This trend was occuring in the art magazines and museums as well. And the galleries I wasn't that interested in probably wouldn't have shown me either. My style was too different from what they showed. So I basically stopped trying to show in galleries.

The only shows I have had in the last 20 years or so were at the Schuylkill Center for Environmental Education where I had two shows of my insect drawings. When I changed to naturalistic art five or six years ago I was too new to it to try to find a gallery to show it.

AND, there was the internet. I've had at least one site for at least five years, and have slowly added this blog, my primary online store, and have tested out the water at etsy, mainly for my more inexpensive prints.

About 10 days ago I read in the local paper about a juried show at a neighborhood art center less than a half mile from where I live. With some trepidation I applied and was accepted.

But why go back to galleries after 20 years without them? Well for one thing it involved little effort on my part. It really was just around the corner. For another I've always liked the idea of supporting 'local' businesses, whether food coops, local art centers, community supported agricultural or whatever. So much of the world seems to have lost the values of the neighborhood, though I have to add that I long ago abandoned my home neighborhood in Illinois and have spent a lot of time living in large cities. I'm sure that this skews my perspective a bit.

A third reason was that art really needs to be seen to be truly appreciated. That's one reason Albert Barnes didn't want color reproductions of his collection. Reproduction is always lacking but gives a false sense of being accurate. I've always been a big supporter of him and his vision of his art before the local courts dismantled it. In any case there is so much more to art when you see it in person. So all in all I just couldn't pass up the chance to perhaps show at the Manayunk Roxborough Art Center.

Above my wife Jerene looks at part of the exhibit last Saturday. And below a shot of the outside sitting area and fountain.

The gallery at the Manayunk Roxborough Art Center is open on weekends from 10 a.m. until 4 p.m. This show runs through July, 31. If you're in the neighborhood please stop by. And be sure to look for those Wissahickon prints.
Posted by Ken Januski at 1:50 PM

Terrific Ken! Congratulations. The ebony jewelwing looks beautiful - of course I am fond of your linocuts. Sounds like a nice venue for your art.

Thanks Ellen! It is nice to see them framed and up on a gallery wall.

By the way we're starting a stretch of 100 degree weather. Hope it manages to bypass you.

Good luck at the exhibit, Ken. I have enjoyed reading your posts and seeing the linocuts and watercolors. Sorry you are having such hot weather. Here in central Spain, where we should be frying now, it is mysteriously, blessedly, cool.

So nice to hear from you! Hope all is well in cool Spain. I'm not at all surprised that normally it's quite hot about this time of year.

Not much activity regarding the show from what I can tell. But you never know. And it always seems good to me to have your work on display. You just never know when the right person will see it!