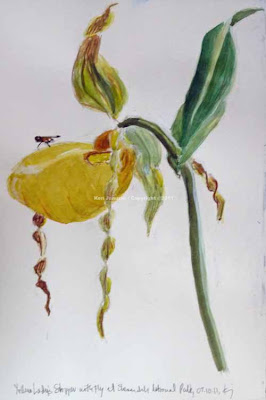 I don't know what it says about me or my sense of history that everytime I read something that some historical figure said that rings true to me I'm shocked. As much as I respect history, the great classics, the 'examined life', etc., I'm always a bit shocked when I read something from years or often centuries ago that rings absolutely true today. And it's always a pleasant experience, as though confirming that yes the world does make sense.

Collinson wrote in one letter..."and don't escape" the lady's slipper orchid, his favourite plant. A yellow one already flourished in his garden at Peckham, but he wanted a variety because the sculptural blossom "makes my mouth Water"

The line about the sculptural blossom of the Lady's Slipper making Collinson's mouth water really hit home. There is something that just begs to be painted, or perhaps sculpted in Yellow Ladies Slippers or pink Moccasin Flowers. Every time I see them, which isn't often and I think only in Shenandoah National Park I'm stunned by them. But reading this same reaction from 300 years ago was equally stunning, probably like discovering that your parents were once young do and thought and acted much like you.

Ever since I read this passage a week or so ago I've had it in the back of my mind to comment on it and the book 'The Brother Gardeners' in this blog. 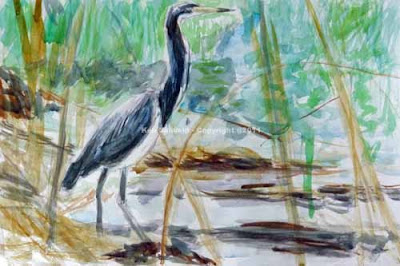 I think what may have pushed me over the edge and made me take up some plant subjects was this failed watercolor of a Tri-colored Heron. It's based on some photos I took at Metzger Marsh in Ohio last May. In marshy areas there are often reeds just about everywhere. So if you paint a bird in the marshes you'll most often have to deal with reeds in one way or another.

I think the reed problem is particularly difficult in watercolor. The reason is that reeds, or at least the parts of them in sun, are pretty bright, often the brightest and lightest part of the picture. They often overlap the darker primary subject, in this case the heron. In oil you can go light over dark. So it would be possible to paint the darker subject first then paint over it with lighter paints where the reeds cross the main subject. That just won't work with watercolor. You can't work light over dark.

And yet if you draw in all of the reeds, something too finicky for my tastes, thinking that you'll use light colors there after you've painted in the darker subject you still have a problem. Unless you paint very carefully, probably with a small brush, it's hard to paint in the main subject in the little sections between the reeds. All sense of a fluid wash disappears. You get patchwork painting. I'm sure some people can do this and others use some sort of masking to protect the light areas while painting in the dark areas. But I've never been able to picture myself doing this. It also seems too finicky for me.

So what's left? I keep thinking that I can somehow abstract the reeds and put them on after the main subject, perhaps leaving just a few blank areas on the heron where I'll put the abstracted reeds. That philosophy applied on this painting ended up with me just abandoning the painting!

But it did make me think I just need to learn to paint vegetation better. I may need to go through some painful times trying to do some fairly accurate paintings of flowers, vegetation, trees.

Between this experience and the Collinson quote I decided it was time to paint a Yellow Lady's Slipper. 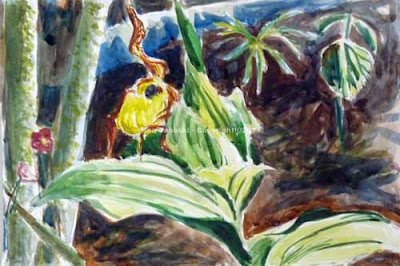 Above is my first attempt. Well as you can see I got so involved with the leaves of the orchid that you can barely make out the orchid. I tried to beat this painting into submission but eventually had to abandon it as well.

When I was done I told myself that I just needed to try some more realistic versions of the orchid, and maybe other plants, where they were the undisputed focus of the painting. That is the painting at top of blog. Yesterday it looked so dead I thought I'd also need to abandon it. But more work today got me to the point of half liking it.

I'm not sure how much I learned. Most of the vegetation I'll see while birding won't be Lady's Slippers. But it is a start and it forced me to pull out my old photographs and take a look.

Finally I'd like to recommend 'The Brother Gardeners'. Given all the petty nonsense that passes for news today, and I'm particularly thinking of one political party when I say that, it's nice to read that Americans, and the British, once had far nobler goals and interests. I've not read Andrea Wulf's new book, 'Founding Gardeners', but I did see her give a talk on it. It was hard to fathom a time when polticians, American politicians no less, were as interested in their gardens as in anything else. How often have you heard politicians discuss gardening over the last 10 years. We seem to have become a greatly diminished country, one in which whatever party or pseudo-party that can sink the lowest seems to win. Maybe all members of congress should be forced to work their own garden plots out on the White House lawn one hour a day. There's a pleasant thought about re-grounding politics and ought to be effective in stamping out some of the nonsense that is currently wafting about.
Posted by Ken Januski at 2:46 PM