Numerous Are The Tortures 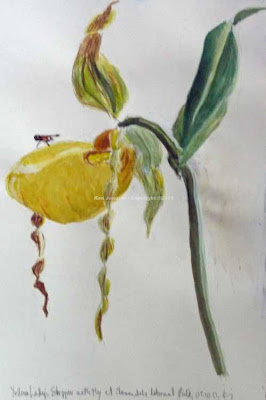 As I drew and painted this yellow lady's slipper the last few days there was something that bothered me. I'd never done any sketches of the plant when I saw it. This watercolor is based on some photos I took. But there were many plants all in same photo. How could I tell I was drawing just the part of one plant?

I know enough about plants, just my visual impression of them if nothing else, to have been somewhat worried about the five petals. Often parts are paired in flowers, though certainly not always. As I read the quote above this morning I got even more scared that I might be wrong in my portrayal. To confirm it I saw that a few pages further on in How to Draw Plants was an illustration of a Lady's Slipper with just four petals. So then I checked Lawrence Newcomb's Newcomb's Wildflower Guide. Same thing. I'd made a mistake.

I learned early on in my bird painting how absolutely confusing photos were, even ones I'd taken myself. Often there was a situation just like this where the photo showed something that looked like a part of the bird. But was it really? I didn't know enough about the structure of birds to say for sure. It was a similar uncertainty about flowers that was in the back of my mind about the Lady's Slipper. I should have pursued this further before starting the painting.

For me art is always more important than accuracy. Keith West's book is aimed at people who want to do botanical illustration and exactitude and faithfulness to what is seen is stressed. I have no argument with this. It's just not my way.

On the other hand I don't want to turn some viewers away from my artistically-focused work on their first glance because something is so obviously wrong. So I try to get things right but just not be limited by them.

In this case though I just couldn't leave that aberrant petal on right of stem. It's been rubbed out and replaced by white gouache.

Now as for the tortured leaves I'm sure that Walter Hood Fitch is absolutely correct. And I'm one of the criminal torturers. That's what I realized the other day and the reason I'm doing more vegetation studies and reading up on portraying plants. Hopefully I'll soon be less of a Leaf-Torturer
Posted by Ken Januski at 1:59 PM