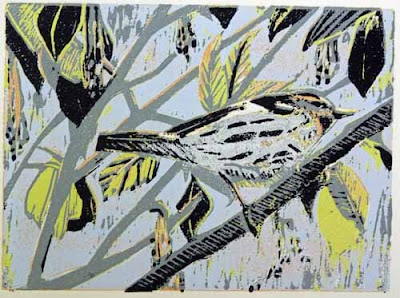 Finally getting near the end here. And my guess is that I'll finish it before Congress raises the debt ceiling, if in fact it decides that's a better option than the full blown recession that seems heading our way.

Oddly enough for all the transmogrifications this print has gone through it's starting to look much as I'd planned. The vague idea is taking shape. I still plan to add a bright orange to just the throat and then replace much of the black in the foliage with green. Whether it will be a tinted green, as i'd originally planned, a medium leaf green, or a darker gray/green only time and experimentation will tell.

I do want to add that last fall I wrote a post on what I expected the November elections would bring: they would have the impact, and not a good one, of a mighty oak falling in the forest and destroying all that surrounds it. This was based on seeing just such a thing at Carpenter's Woods. That seems to be exactly what we've gotten. You get what you elect.
Posted by Ken Januski at 11:23 AM