Where Did This Patience Come From? 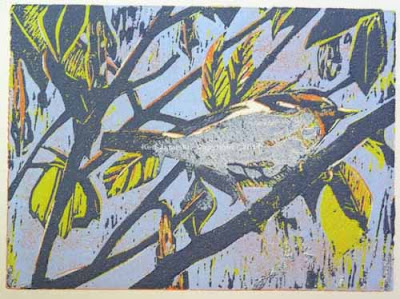 I've never been a patient person. But as with most people age and experience has shown me that sometimes it pays to at least try to be patient.

In art it's easy to feel like I want the results now. I want that extremely vague idea in the back of my head to immediately appear as a finished masterpiece as soon as I begin a new work. I know some people like to work more slowly and almost meditatively. There's something appealing in the process of working itself, not just in the finished result.

I understand the second camp but I'm more with the impatient artists I'd say. Still I've learned that good work generally doesn't work that way. It is like true conversation. You have to look and listen to what the work is telling you. I know this might sound hopelessly mystical and nonsensical to non-artists. But really it's no different that a major league shortstop fielding a hard hit ball in an unfamiliar ballpark. The shortstop doesn't just methodically catch the ball, knowing exactly where it will go once it leaves the batter's bat. All sorts of odd things happen along the way. You need to stay alert.

The same is true in art. You need to stay alert and sometimes you have to take a lengthy road to get to your goal.

That's the case with reduction linocuts. When I began this print I anticipated six colors, a light orange, bright orange, yellow-green, blue, black and green. A light gray and dark burgundy were also possible for small accents.

As you can imagine printing at least six colors means a lot more work. So my thought is: if I'm going to make such a complex print I might as well make a large edition, assuming of course that the end result will be successful. So that adds more work. For this print I've done about 30 proofs and 18 actual prints. Each proof and print must be properly registered so that the various colors match up. For instance I don't want the black of the limb mistakenly appearing on the white of the birds breast because of sloppy registration.

So you can probably see this is time consuming. It comes as a great surprise to me, an impatient person, that I have the patience to go along with this lengthy process. 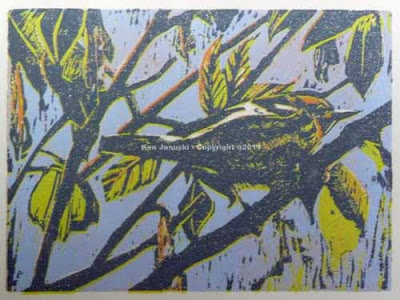 I printed the fourth color yesterday, as seen in the photo above. I'd have to say this was sloppy thinking on my part. I was looking for a grayish white that would show the whitish breast in shadow, but I also wanted a gray for some of the more distant limbs. Instead I got a very, dark gray, far darker than I'd anticipated. BUT there was something I liked about the strong contrast it created with the other colors.

Today though I realized that it was just too untrue to the breast of the Blackburnian warbler, even in the darkest shadow. So today I mixed up a largely transparent white. I inked just the breast and printed a proof. I wasn't thrilled with that so I inked the entire linoleum block, knowing that I could always print over areas that I didn't want to be white in the finished print. That looked far worse. So finally I went with the white in just one area, as shown at top.

There's one problem with that. It looks a bit ugly. Most of this is due, I think, to the fact that it is a loosely defined area. I know however that I'm planning to print the black breast streaking of the bird in that area. My hope, is that once the black is printed the breast will also look crisp.

Where in the world did I get the sort of patience that allows me to spend over a week on a print? I'm not really sure. My guess is that it's a matter of hope springing eternal. Somewhere in the back of my mind I think the results will be worth the work.

If you wonder why, though, I don't do more reduction linocuts, I think you now have your answer.
Posted by Ken Januski at 12:41 PM