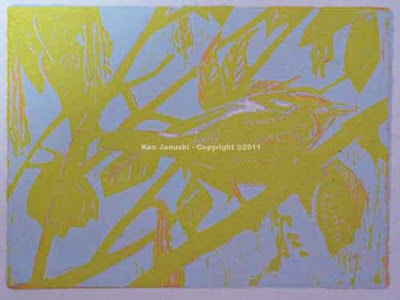 Like much of the US we're going through some triple digit weather. Since we don't have air conditioning, and don't really want it, anywhere except the bedroom it tends to get a bit hot on days that are over 100 degrees Fahrenheit.

But this is when a basement printing setup pays off. It's always a lot cooler in the basement and that's where I do my actual printing. So I look at the print and do the carving in my blazingly hot studio on the second floor. But then when I go to print it's cool. So I've spent the last three days working on this new reduction printn

It's based on a watercolor sketch I showed back in May or so of a Blackburnian I'd seeb at Magee Marsh in early May. Reduction prints are somewhat like a leap of faith. The 'faith' is in your ability to make the whole thing work. Maybe some people can clearly plan out the 5-10 colors that might be used in a reduction cut. But not me, and not most people I'd guess. I come up with a vague plan but then I base most of my further decisions on the proofs that I pull as I go along.

This proof has gone through three colors plus the white of the paper. You can still see some of the orange that was the first color. That was followed by the light blue, then the light yellow. I still plan on 3-5 more colors and the print might dictate still more. As I go along my faith is in my ability to react to what happens and still come up with something I'm happy with.

I'd guess another 3-5 days on this print, perhaps more. 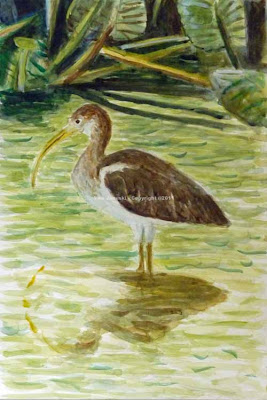 Though it seemed accurate the neck on the juvenile white ibis that I showed a week or so ago seemed a bit thick. Some recent photos by others of the same bird at John Heinz NWR in Philadelphia that I happened upon on the web also showed how the neck can seem very thick when held a certain way.

But the neck can also look slimmer. I also felt like that watercolor didn't adequately show the variation in neck color. So above is a second watercolor of same bird, this time looking slimmer and doing a better job with the neck coloration I think.