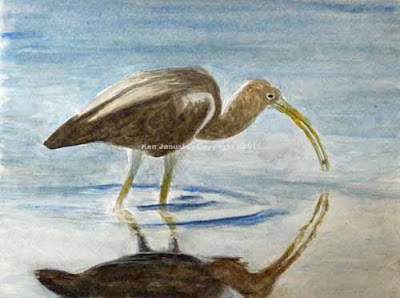 No sooner had I written about migrant birds being gone and the residents now having their neighborhoods back for their own personal use than a southern bird, the White Ibis, was reported at Tinicum, a.k.a. John Heinz NWR. Since it was a beautiful day yseterday, though a bit hot in full sun, I decided to take the 15-mile drive and try to find and sketch it. 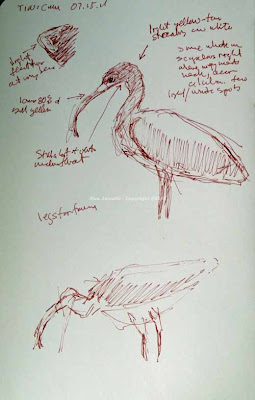 I don't know if I've ever experienced a more easily found life bird. And during the 60-90 minutes I sketched it the young bird never moved more than 25 feet. Above is one of the better field sketches I tried.

The watercolor at top is based on a photo I took, coupled with my memory of the bird. When you spend 60 minutes sketching you do tend to develop solid visual memories. One of those memories is the beautiful streaking on the neck, a combination of ochres, browns and whites, much like a shorebird. Unfortunately many of the photos showed the bird in shadow, so they don't really show the subtle coloring on the neck.

This streaking by the way, along with other clues, indicate that this is a juvenile bird. Breeding adults are bright white. Since I'd never seen one before I was looking for a white bird. But once you've seen the curved bill of an ibis it's easy to spot one regardless of color. 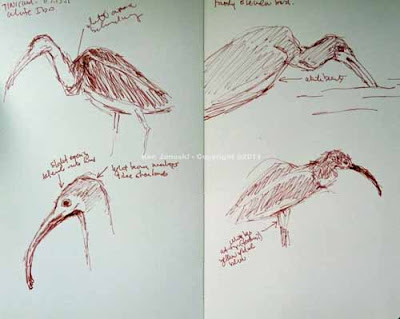 Above are my first sketches. I think they got better as I got more familiar with the birds. Another birder told me that this bird was a post-breeding wanderer. When I checked my guidebooks when I got home they also mentioned that White Ibis are known for this. So this bird is not a northern migrant heading back south. Instead he's more like a youthful explorer. You know youth!

So it seems aside from him the breeding birds still have their neightborhood to themselves right? Well not quite. I also saw at least 65 Least Sandpipers at Tinicum. Another birder, who leads walks there, told me that these were males heading back south. I've read about how early fall migration begins. But this is the first time I've ever personally been hit over the head with it. But I can't complain. A lump on the head is well worth the price to see so many beautiful birds, especially when you know their story and their lengthy migration. It just makes the natural world seem all the more amazing.

I took photos but had no time to sketch. Hopefully I'll soon get back out to sketch or will try a painting based on the new photos as well as some from Ottawa NWR in May when they were heading north.
Posted by Ken Januski at 12:08 PM

It is wonderful to have you sketching at Tinicum. I am glad you were so inspired by the White Ibis at Tinicum - Heinz NWR is really a special place, and I hope you return often to draw.

Thanks Adrian. I always enjoy Tinicum. It's just that the drive there on 76 that seems to prevent me from visiting as much as I should and I end up going somewhere closer to home.

But maybe that will change. The birding and sketching opportunities are tremendous! I loved being able to sit down and sketch the ibis.

You are not going to believe this - I was at Tinicum that very same day! I was visiting with a good friend of mine from college who is also an avid birder, and we even met Adrian there! (Hi Adrian! It was very nice to have met you. Thanks for pointing out so many great birds to me!)

It's been 7 years since I've been back to Philly and my husband and I decided it was high time for a visit. I'm so sorry I didn't see you there that day! I did see the white ibis, but I have to say that for me the highlight of my birding day there was a fabulous look at an indigo bunting. That blue! *Sigh*

Happy to see you and also happy to see that your blog has been somewhat resurrected today. I need to take a longer look tomorrow.

Oddly enough there is another ex-Philly person, Gretchen who now lives in China who contacted me that she also missed me at Tinicum at the time of the White Ibis. Who would have thought?

Yes the Ibis wasn't as colorful as you might have expected but at least you saw your bunting. And you're right it's very hard to beat that color. I have a couple of photos of buntings I took, one with white crabapple flowers I think and the other amidst yellow and green leaves that I often consider making into a painting. But I've not yet been convinced to. Maybe because I fear I can never match the blue of the bird!