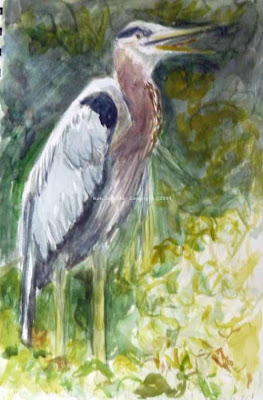 Nature sometimes surprises you. That I think is one of the virtues of taking the time, or maybe having the luxury of the time, to pay attention to it. Yesterday we took a three hour walk along the Manayunk Canal which borders the Schuylkill River not far from where we live.

But we did see at least one Great Blue Heron with his mouth wide open, tongue sticking out and cheeks moving in and out very quickly. In other words it was panting. I wouldn't be surprised to see this on a day in the 90s. But it was only about 80 when we saw this numerous times. I assume it was the same heron at various parts of the canal but it's hard to say for sure.

In any case it was striking and led to some further investigation when I got home. This behavior I guess is not all that uncommon in herons. It just seemed odd given the temperatures.

At one point he was high atop a 10-12 foot shrub. I did a sketch and also took some photos. The small watercolor above is based on both. The photo turned out a bit darker than the actual watercolor. 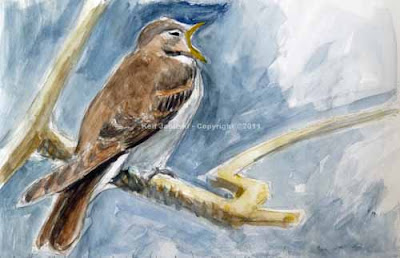 A few days ago I was walking along the Wissahickon hoping to find at least one of the two Louisiana Waterthrushes that I'd seen in mid-June. No such luck. But I did get some good looks at a couple of Northern Rough-winged Swallows. I did field sketches of them and also took some photos.

Since I've seen so many, especially immature ones, and done field sketches of them I wanted to do a watercolor sketch. I'd also taken some photos and looked at them as well. I was quite surprised to find one immature with his mouth wide open. Was he yawning, begging as young birds often do, about to snap his mouth shut on a flying insect? I don't know. The photo also indicated that the nictitating membrane was partially covering the eye.

This presented a problem. Should I paint something I'd never actually noticed when I looked at the bird with my naked eye? Because I need practice portraying birds with their bills open I decided to do so. There is a huge gape in most birds, much bigger than you'd expect by just looking at the bill.

So inadvertently my last two watercolor sketches have been of birds with open mouths. There's no secret meaning here, just a recording of an odd natural coincidence. But it is a happy one and indicative of why I never get bored on my walks or in my art.
Posted by Ken Januski at 2:41 PM