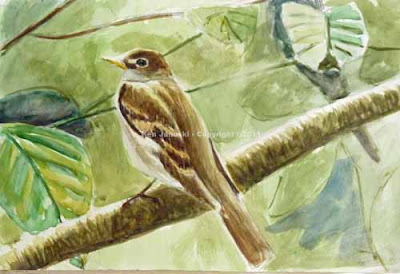 Anyone who has lived in a tourist town or a touristy section of town, as I once did in San Francisco, knows the odd feeling of your neighborhood not really belonging to you. There are all these strangers there, acting like it is THEIR neighborhood.

I had to think of that today while briefly birding and sketching at Carpenter's Woods. Most of the migrants have been gone for a month or so, breeding somewhere farther north. And at least at Carpenter's Woods, the tourist birders are gone as well. They can be numerous in late spring but are almost nonexistent now.

Whether that makes the breeding birds more normal I don't know. But it seems to. That is the feeling I have as I walk through the local places that I bird.

For instance the Acadian Flycatcher, shown in a new watercolor sketch above, sometimes seems like the most numerous bird at the Wissahickon. They're still hard to see as they tend to be at least 15 feet up, fairly well hidden in dense foliage. But I generally get a glimpse of one or two on each walk. 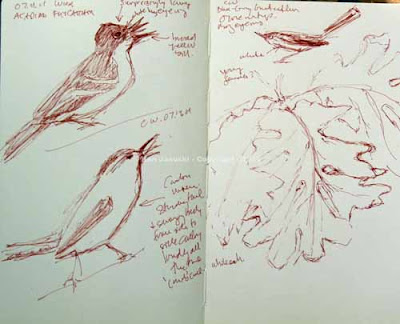 That's one at top left in the field sketches above. It's not really all that successful and doesn't look much different than the many other sketches I've done of it this summer. So while this recent viewing was fresh in my mind I decided to do a watercolor sketch from some older photos I'd taken. My thought was that doing something more developed might coalesce all the tidbits of knowledge I had picked up in all my recent sightings. Hopefully it will. The only other solution I can think of is to just camp out in their vicinity and keep sketching each time they make their 15 second appearance until I have them down.

The tourist season analogy hit me today as a Carolina Wren seemed to scold me for a 5-10 minutes. It took me awhile to realize he was right in front of me, only six feet away, rather than 12-15. The sketch above tries to capture the way he stood with legs splayed, stretched tall as could be, head almost straight in the air, calling out loudly. What was oddest though was how he would switch from facing right to facing left as he did this. Each time he made this quick movement he struck a new dramatic pose. Like the Acadian I'm not happy with the sketch. I also took a couple photos. I might trying to use this sketch and the photos to try to capture this striking event in watercolor.

Regardless of the sketch though the actual experience got me to thinking that I was now in the real world of birds. Perhaps he was warning off a mate on eggs, or with young. In either case it seemed like I'd intruded in the daily life of my local birds.

That's not quite as exciting as glimpsing the brilliant neo-tropical migrants on their short trips through. But it is very satisfying and not at all to be missed. There's nothing like knowing the natural order of the place in which you live.

Oh yes. A field sketch of some low-hanging White Oak leaves. I'm determined to spend more time on this. No more leaf torture remember?
Posted by Ken Januski at 6:04 PM